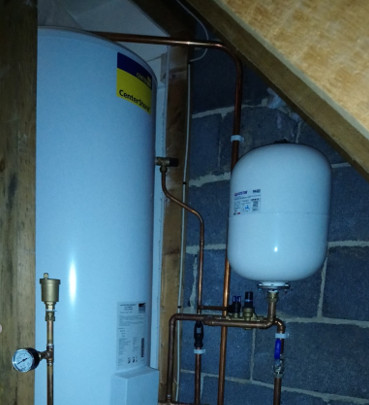 It would seem that the Bunsen Air Solar Assisted Heat pump, could be the IDEAL last-minute solution and retrofit upgrade to your hot water circuit, and the best bit is – there’s no rush to have it installed, meaning you can do so when you are good and ready!

Here is an example of how one couple, did exactly that…

Last year Kath and Kevin moved back to Middlesbrough, North Yorkshire from the South of France, where their experience of water heating, is not one they would like to repeat…

Their French home was a very large house with numerous bathrooms, and, living away from their friends and family, they would often have guests to stay.

There was no gas connection to the house as it was in an extremely rural location (set between two vineyards to be exact) – meaning that their whole home ran on electricity.

In order to supply the entire house with hot water, they needed two water cylinders, which were heated electrically by an immersion heater.

In an attempt to try and reduce the costs of electricity to heat their water, Kevin connected timers to their immersion heater, with the incentive that it would only heat water at certain times of day, but in turn, making spontaneous hot water use difficult.

On making the decision to move back to the UK, Kath and Kevin, who both shared a keen interest in property development, decided that they would look for a property to renovate.

On finding that property, they then thought about how they could incorporate a Middlesbrough solar hot water heater, with the intention that this thermodynamic hot water system would become a fully reliable source of hot water for their home, and in turn, significantly reduce their energy bills.

The sale of their French home meant, that after buying their new Middlesbrough home, Kath and Kevin only had enough money to partly renovate. Fortunately, they were also selling their existing UK home, but until the money from this sale went through, they were having to make do with what they had – which was a house that ran off oil.

Knowing that they required a new hot water cylinder anyway, as the existing one was extremely old and in need of replacement, Kevin looked into options for renewable hot water in Middlesbrough, and whether he could eventually retrofit such a system to his existing circuit.

Solar thermal was an option, but since the growth in awareness and popularity of thermodynamic replacements, and an increase in the understanding that thermodynamic hot water systems can produce hot water in all weather and at night, he ruled out solar thermal – it simply wasn’t as efficient or reliable.

Kath and Kevin needed something that could become a fully dependable source of hot water and an upgrade to what they currently had, as opposed to a backup (which is what solar thermal would be).

On doing his research, Kevin had come across an existing Bunsen Air article, which discussed the supreme benefits users of oil could experience from the installation of a Bunsen Air, as an upgrade to their existing water circuit.

He contacted Solamics and spoke their supplier who, on having been explained that until the sale of their existing UK home was complete, they would not have the money to purchase and install a Bunsen, advised that this didn’t matter…

Kevin had also explained, that he would need to replace his cylinder urgently, due to it being completely warn out.

The West Yorkshire Bunsen Air supplier clarified that this was all fine, all that was required in Kath and Kevin’s initial home renovation works, was that their new water cylinder fitted in a place that could also house the Bunsen Cylinder adjacently, and the pipework to the external thermodynamic panels could comfortably lead away. 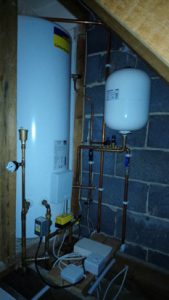 In light of this, Kath and Kevin had their new hot water cylinder in Middlesbrough fitted upstairs, in a room where they knew that when they could afford their Bunsen Air Solar Assisted Heat pump, this would be easily installed.

Kath and Kevin were told, that when they do eventually have their Bunsen Air installed, the reduction to their energy bills will make their experience in France but a distant memory as the system can provide for 100% of their hot water needs.

Alongside this, there would no longer be any need to attach timers to their boiler, as the Bunsen controller’s fully automatic functions, would allow them to program their system to suit their lifestyle with the Bunsen only requiring a very small amount of electricity to run. Meaning that should they so choose in the future – there is always scope to install solar pv panels in addition to their Bunsen Air, which could potentially offset the Bunsen’s running cost completely.

With evidence to suggest that existing oil users have been able to switch off their oil supply to hot water completely, there is no reason why, the Bunsen will not begin to provide for 100% of Kath and Kevin’s hot water needs – making the Bunsen a fully reliable solar retrofit upgrade… 100% worth the investment, and in their case… 100% worth the wait!